In 1940 Rotterdam was bombarded. A large part of the city center was destroyed and had to be rebuild from scratch. This reconstruction has made Rotterdam as we know it today: a modern metropolis with a lot of unique architecture.

Unfortunately, the bombing of Rotterdam has destroyed a lot of its history. But there are still pieces of the past to be found in the port city, especially in the Old West. This historic route in Rotterdam brings you to those interesting places.

How to get around? For this route I recommend public transport or going by bike, as some parts are quite far away from each other.

Tip: walk along the fire line in Rotterdam. The fire line shows what area was destroyed in 1940. Since 2010 this border is marked with icons that show flames with the silhouettes of the burning city, a Heinkel He-111 bomber and the image of La Ville Détruite (the Destroyed City) of Ossip. 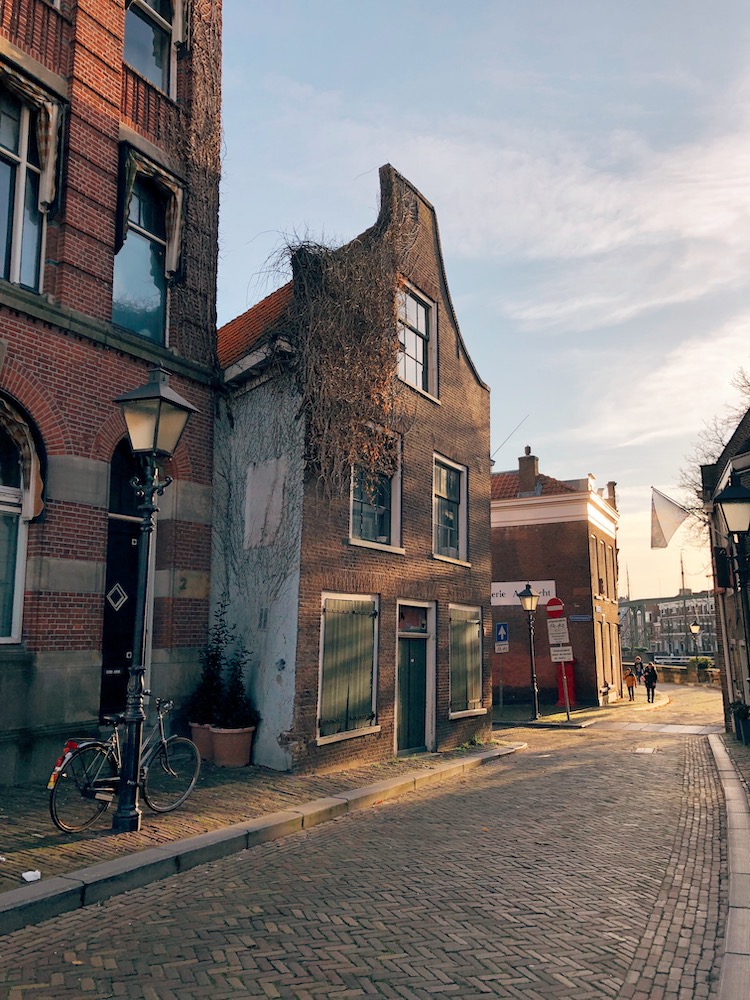 This historic route begins in Delfshaven. Delfshaven is located next to Rotterdam West and Middelland and is easy to reach with the subway, tram and of course with a bicycle.

Historic Delfshaven has more than 700 years of history as this piece of Rotterdam survived the bombing in 1940. This allows us to admire the architecture from back in the day. Delfshaven is in contrast with the modern city center of Rotterdam, with cute little narrow streets and tall but narrow town houses.

So if you are looking for a piece of Rotterdam history, we recommend starting at Delfshaven.

The Binnenweg is situated between the city center of Rotterdam and Delfshaven. From the 1st Middellandstraat you can reach the Nieuwe Binnenweg within 10 minutes. This is also a part of Rotterdam that survived the bombing.

Already in 1454 there was a “Binnenweg”, what was called the Coolpolder back then, and it runs from the old center of Rotterdam through the meadows to the village Delfshaven.

At the New Binnenweg and Old Binnenweg you will find nice vintage clothing stores, culinary items and stylish boutiques. We recommend to start at the Nieuwe Binnenweg and then head to the Oude Binnenweg. They are basically the same street with a road between them, so easy to combine the two during a visit.

It’s possible to get from the Oude Binnenweg to Kruiskade in a few minutes time.

The Kruiskade is another beautiful historic spot in Rotterdam. The Kruiskade already existed in the Middle Ages. Back then it was a low embarkment between the Coolpolder and Schoonderloo on the one hand and West Blommerdijk and Beukelsdijk on the other.

In the 19th century a large part of the Kruiskade was built. The West Kruiskade was in Delfshaven and became the heart of the Old West. The two Kruiskades are not far from each other and can certainly be combined.

At the West-Kruiskade you will find a rich mix of cultures and it’s definitely a great place to have lunch or dinner. For instance, take a nice bowl of Japanese ramen at Takumi Düsseldorf, green curry at Soi3 or get some roti at De Kade. Delicious!

And then the last stop on this route: “Oude Haven”, which literally means Old Harbour. To go to the Old Harbour we recommend to take the bicycle or the tram at Kruisplein and get off at station Blaak.

The Old Harbour was formed around 1350 when a dam was laid in the Rotte and is Rotterdam’s oldest and first port. Fishermen started living at the dam where they build a wharf, and over time Rotterdam emerged.

At the Old Harbour you will find the White House, a building from 1898. This was once the tallest office building in Europe with its 45 meters. That is quite hard to imagine now!

Plan C, from 1880, was a business collection building that was part of a city planning operation. The Cube Houses were build in 1984 and thus significantly newer, but certainly worth the visit.

At the Old Harbour you can find many nice and cozy restaurants and bars. It’s a great place to end your day and have a bite to eat! For example, at Popocatepetl you can eat delicious Mexican and at 91Spices they serve tasty Indian curries.

Hopefully this route will ensure a day full of Rotterdam history. Of course, you can also start halfway through the route, walk him from back to front, or cut it up in parts. Be sure to also read our article with great places for a walk in Rotterdam.

Shopping route in Rotterdam: 7x the best places to shop!